During World War Two some 80,000 men served in the Royal Marines, and they continued to operate at sea and in land formations, but 1942 saw the formation of the first Royal Marines Commandos. 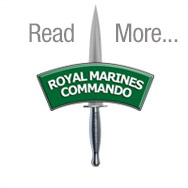