My ride started Friday afternoon by visiting Steve at LIOS Bikes Ltd, http://www.liosbikes.com to collect his bike.  Steve had kindly agreed to loan me the bike after a delay from the manufacturer in supplying some parts, meaning my bike would not be ready in time for the ride.

I had wanted to ride a LIOS bike for two reasons:

Despite my initial reservations, logistically, getting to London and riding back without all my kit turned out to be quite simple, more on that later.

The train journey to London was relatively uneventful apart from when two youngsters (and their entourage, complete with pushchair) got on the train somewhere just short of Clapham Junction.  They were obviously less than sober but weren’t rude or abusive to anyone, just feeling sorry for themselves.  All of a sudden, the lad jumped up off the floor and announced that his girlfriend was going to be sick and “sure as eggs is eggs” she promptly was, thankfully not before making it to the space by the doors.  Fair play to them though, with assistance from the girl with the baby and a packet of baby wipes they cleaned it up.  They left the train at the next stop with the girl stating, “I feel much better now, let’s go to the pub for a drink.”  Eastenders’ scriptwriters I hope you are reading this.

On arriving at Hampton Court station it was a quick couple of miles to the Premier Inn.  The receptionist there was very lovely and helpful, even offering to microwave some porridge for me when it became apparent I would be on the road before breakfast was served in the adjoining pub.

I hoped for an early night but just as I was getting settled my phone fired up and three calls later I finally hit my scratcher at eleven thirty.  Never mind.

The following morning, bright and early, I left the Premier Inn with my travelling kit nicely packaged up ready to drop at the appropriate shop for mailing back to myself.  Hermes do a great service where you can book your package/parcel in online, print the label then drop it off at a convenient shop rather than wait for a courier to come to you.  Easy peasy.  It was especially good because the shop was en-route to Hampton Court Palace and the muster point for the ride. 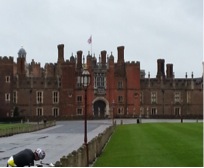 I had no idea how many had entered the ride and when I arrived there were probably 10 riders there.  After a short while more arrived and I think the final total was 60-70, which was a good turnout.

Paul Sampson arrived with his team and we all gathered for some photo’s in front of the spectacular backdrop of Hampton Court Palace.  Joining us for the ride would be Paul’s wife, the Kirsty Gallacher, the Gabby Logan, cycling legend Darren Kenny (doing the whole thing with Paul) and a whole bunch of their friends and random cyclists.  One of Paul’s support crew was apparently another former Bootneck but I never got a chance to meet him.

Paul gathered us for a quick chat and thank you before we were let lose on London’s roads in the morning traffic.  He was very sincere which, for me at least, got me in just the right mood for the epic to come.

I was under strict instructions to get a picture with Paul and Kirsty as they were also riding LIOS bikes, hence my grinning melon below. 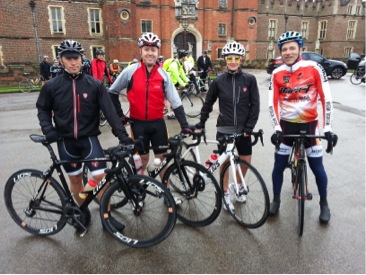 I partnered up with Rob who was also a former Bootneck.  It never seems to be a chore to do anything with other Royals and we both had a similar pace, which made things easier.  We set off well, heading away from Hampton Court towards Esher, past Sandown Park racecourse and to the leafier and affluent suburbs.  After approximately 4 miles we met Kirsty and her merry gang attempting to fix a puncture, so we stopped to help and get them on their way.  Hopefully the bloomin’ thing stayed up because Rob and I soon left them behind and cracked on.  I have to admit to not knowing my way around them there parts so I was grateful to have Rob with me who did.

The roads were pretty wet after the previous days rain and on some of the quieter roads there was a considerable amount of gravel in some awkward places.  It wasn’t long before we came across a couple stopped and attending to the guy’s bike. Again we stopped to offer assistance (we were rapidly becoming the event AA).  He couldn’t change down from the big chain-ring to the little, which was a problem on the hills, and it seemed his front mech had seized.  We eventually realised that the cable was too tight so a quick tweak got it all working again, albeit good enough to get him to the halfway stop.  It also turned out his cycling partner (wife I think) had crashed on a slippery corner.  She had scuffed her rather nice jacket and she thought she had broken a finger but apart from that, she seemed fine.  The route profile suggested the highest climb was after 14(ish) miles but if memory serves, it was a long gradual climb so didn’t really register.  The climbs that did were yet to come.

We eventually reached the halfway point and the food stop at Chris Evans’s The Mulberry Inn.  There we had bacon sarnies and coffee with some bananas thrown in for good measure.  This was a high point of the ride for me.  Due to the smaller numbers on the ride, the atmosphere at the Mulberry was great with most people happy to talk to each other despite not really knowing who was who.  At least that’s what I thought, but you know me, I’ll talk to anyone like I’ve known them for years.   We stopped here for probably too long but had good chats with some very nice people. 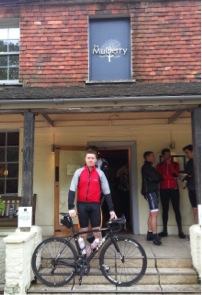 Setting off again was tough, as the legs had gone to sleep by then.  It took Rob and I many miles to get back into a rhythm and then we went wrong.  We had not long put the kiss of death on it by passing Gabby Logan and her cycling companions and telling them we would see them in Pompey, but not in a smug way I hasten to add.  Shortly after and whilst bombing along the A283 towards Petworth we became navigationally challenged and completely missed a turning sign that had been blown round on its post.  It wasn’t until we hit Petworth that we started to think something wasn’t right.  There were no signs on the junctions and we hadn’t seen any other riders so we decided, as you do, to retrace our steps until we picked up a sign.  We met one other rider, Jonathan, who also thought he was on the right track until he pointed out he hadn’t seen Gabby and her friends, at which point we knew we had definitely gone wrong.  We eventually found the turning point and rejoined the route but not before adding approximately 12 miles to it.  My legs were getting tired.

Not long after this we hit the mother of all climbs.  It started steep and didn’t get any better resulting in me having to get off and walk before my lungs and legs exploded.  It was just too much on a 53/39 chainset for my “not as fit as I thought” body.  It wasn’t until we got to the top that we saw the gradient sign…

We knew by this point we were quite a way behind most of the field and the old legs were struggling to turn in a good average speed, but we pressed on regardless hoping to find a shop to refuel.  By now all my food had been eaten and all my drink had been drunk so reserves were getting low; damn that detour.  We were starting to drip like all good Bootnecks do while at the same time laughing at ourselves for dripping like a couple of grumpy old Bootnecks.  Every hill became Everest as our energy levels dropped but some how we ploughed on still maintaining around 15mph so I wasn’t too unhappy.  We eventually found a shop in Rowlands Castle and refueled ready for the final push to Portsmouth.  This was more my neck of the woods and was a welcome place to be, knowing we didn’t have too far to go.

As we hit Havant the heavens opened and we got soaked, but we didn’t care because Pompey was now on the radar.  We seemed to get a second wind and picked up the pace a bit as if to try and raise our overall average speed; I’m sure it didn’t.  Entering the outskirts of Portsmouth I started to feel relieved, I knew I only had to keep my weary trunks turning over for a bit longer and we would be at the finish.  I took my, probably long awaited, turn on the front through Portsmouth after Rob pretty much lead us the rest of the ride.  Fair play Rob, you’re a stronger rider than me.

At last we arrived at the dockyards Victory gate, so named after the famous ship, not our sportive finish line.  We made our way to the lovely (in every sense of the word) Natalie and Jo Jo of Event Girls http://www.eventgirls.net/index.html , the event organisers who checked us in and informed us that there were only five riders left to come in.  Gutted, everyone else was having tea and stickies by the time we finished.  Damn that detour.

Rob’s family were there to greet him, which was very nice.  We exchanged thanks and goodbyes before they packed him up for his journey back to London; I suspect he slept most of the way.  Thanks again Rob, you were an excellent cycling companion and very good fun.

I made my way to the café and joined some of the other riders for a well-earned hot choccy and sit down.  After a while we all rallied round to cheer in the remaining riders.  For these girls it was an especially exceptional effort because many of them don’t ride regularly, if at all.  Well done ladies, you know who you are.

Overall I thoroughly enjoyed the day.  The route was (a bit too) challenging but very scenic and a pleasure to ride.  For me though, what made the day were the people.  Unlike the bigger sportives I ride, everyone, without exception, was incredibly friendly and had huge smiles on their faces all day.  Huge, huge thanks to Steve at LIOS bikes for the loan of his steed which performed faultlessly, to Quench Worldwide for providing the POSI+IV totally natural energy drink that fuelled my aging pins and lastly, but by no means least, to Paul Sampson for putting on the event and allowing us to join him.

The best of luck for the remainder of the ride Paul, you’re gonna need it…

If you want to donate to Paul’s chosen charities for his epic ride from Bradford to Gibraltar please follow the link: