One week to go.  Blimey, I can’t believe it has come around so quickly and now it is all becoming very real.

Training now is all about tapering. This week I have cracked 60 miles of riding to work and a nice easy ride out with the Dorset Rough Riders (DRR) beginners.  As beginner mountain bikers we never really know what we should be carrying, and I have also noticed over the weeks that many were not carrying sufficient water supplies, so I took it upon myself to do a mid-ride demo with some suggestions on what kit to carry and some advice from British Cycling on how to hydrate correctly.  I think it was well received despite everyone getting troffed by mozzies while we were standing around.  Eventually I aim to do a video version and stick it on the site so wait out… 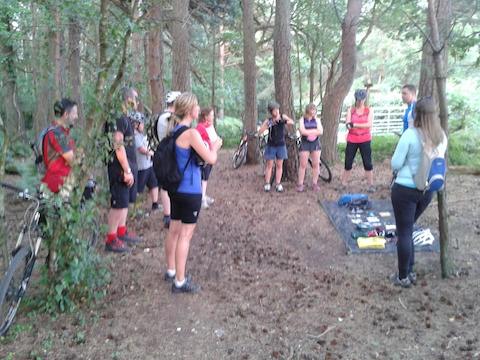 Saturday saw me join a couple of the guys, who will be riding the RMRIDE350, in the Falklands Square, Poole, for a bit of additional fundraising.  Si had jacked-up a day of riding on our turbo trainers while some willing helpers (Si’s wife and sister) rattled some buckets and handed out gizzits like wrist bands and stickers.  Si and Chris got going around 09:20 and I pitched up just after 10.  It was redders in the chosen spot with no air flow to cool us down but at least we were in the shade, for the time being at least.

We had a steady flow of donations from £10 notes to handfuls of coppers and the buckets quickly started to become heavy.  There were some interesting conversations taking place, especially with some of the veterans, and everyone we met seemed very proud of what our Armed Forces do on a daily bases.

The heat was relentless and we all quickly necked what fluids we had brought along and needed a RAS.  It was a good excuse for me to nip off to buy another 10 litres of ogin and briefly rest my legs.  Trying not to touch anyone in my honking state after my skin had been leaking continuously was a commando test in itself.  We were eventually joined by another three guys who duly took their turn on whichever bike became free while the three of us grabbed some scran or helped rattle the buckets.

We were also joined by Dug Hickin and his wife, Kim, who dropped by to say hello and see how we were doing.  Dug and Kim have organised the RMRIDE350 and have put in a tremendous amount of effort over the last 18 months to get it up and running (or riding).  Dug kindly put his hand in his pocket and bought everyone a hotdog, while Kim disappeared shopping and didn’t buy anything.  Good skills indeed and I’ve booked her to come and teach HQ1 how to do it.

Our finish time was 16:00 which was perfect as the shoppers had started to dwindle and Chris’s hoop was begging him to get off the bike and sit in a bucket of Sudacream.  It was also about right because by this time the sun had moved round sufficiently to now be beaming directly onto us.  As we packed up and reflected on what a hoofing day it had been, people still dropped money in the buckets which was great.

I have no idea how far we travelled but I eventually did the best part of six hours in the saddle while Si and Chris cracked nearly seven.  Not bad considering I can’t bear even an hour in the winter without a couple of episodes of Family Guy.  Big thanks to Si for organising it, to all the lads I met with whom I will be sharing their pain next week, to Jules and Sandra for rattling the buckets, to Dug and Kim for their support and finally to all the people of Poole who very generously donated.

As always my final thanks go to my old mate Wayne and Sue and Cliff for donating this week and edging me closer to the magic grand.  This time next week I’ll be sat on a cushion nursing a sore body and probably asleep.  Looking forward to it, see you then.